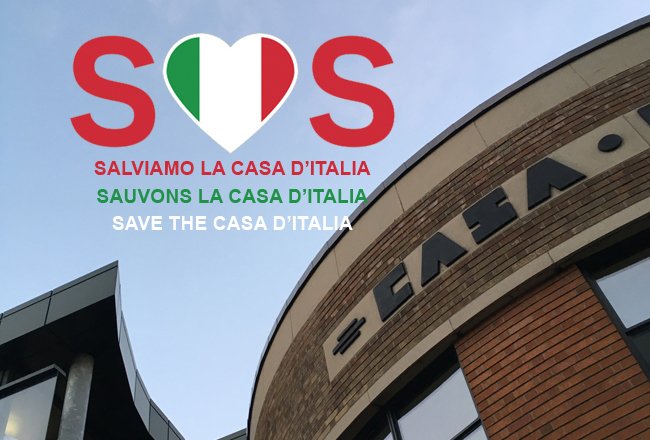 On Monday, May 14, the Board of Directors of the Casa d’Italia in Montreal launched an ambitious fundraising campaign in hopes of raising $3 million before the end of 2018.

The Casa d’Italia – built in 1936 by and for the Italian community of Montreal – has had a rough few years. The community centre is in serious debt, stemming from its 2011 renovations and years of dwindling revenue.

Early last year, the centre was under threat of foreclosure. Then in September, its entire staff and almost all of its Board of Directors resigned after their attempts to gain control of the financial situation failed. The team was counting on the creation of a new umbrella group called Unitas that would see all the major local Italian organizations unite under one banner. That venture would guarantee the Casa d’Italia an influx of much needed cash. Instead, the venture failed and the team was left with no viable solutions.

The sudden resignations were met with surprise and panic.

In a matter of weeks, a small group of community leaders came together to create a new Board of Directors, hire a new Director General, and meet with its bank to renegotiate a new agreement for its debt repayment.

At Monday’s press conference, Sabino Grassi, Vice-President of the Casa d’Italia and responsible for the fundraising campaign, announced that the fundraising committee has actually been working for months. To date, they have raised over $560,000 in donations from big private donors. They are now turning to the community at large to do their part.

Grassi also explained that one of the first tasks the new Board of Directors took on was to analyse the financial sustainability of the Casa d’Italia. Their conclusions were that the Casa could indeed be viable, if it was not carrying such a huge debt.

The fundraising campaign was thus created to bring the overall debt of the Casa d’Italia down to zero and also to raise enough money to complete its major projects, namely, an Italian community archive centre, a library, a permanent museum and a fully functional kitchen.

Agata De Santis is the founder and editor of italocanadese.com.